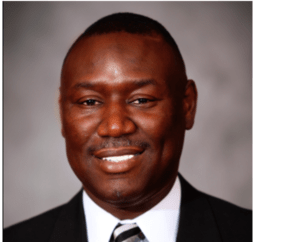 •   Host of the Television Show “Evidence of Innocence”

•   Attorney for the families of Trayvon Martin & Michael Brown

Through a steadfast dedication to justice and service to others, Benjamin Crump has established himself as one of the nation’s foremost attorneys and advocates for civil rights and social justice. His legal acumen as both a litigator and advocate has ensured that those most frequently marginalized in American society are protected by their nation’s contract with its constituency. He has successfully battled to protect constitutional rights at the local, state, and federal levels, using his advocacy skills and the high profile of the cases to provide a voice to those long silenced and hope to those pushed to the outside. Crump is the principal and owner of Ben Crump Law.

Benjamin Crump has served in leadership positions at the highest levels of the legal profession, and has been recognized for his efforts by numerous esteemed organizations. He served as the 73rd President of the National Bar Association and is President of the National Civil Rights Trial Lawyers Association. In 2016, he was designated as an Honorary Fellow by the University of Pennsylvania College of Law, and he has been nationally recognized as the 2014 NNPA Newsmaker of the Year, The National Trial Lawyers Top 100 Lawyers, and Ebony Magazine Power 100 Most Influential African Americans.

Attorney Crump has represented clients in some of the highest profile cases in the United States, recovering millions of dollars in damages for them. His work has involved the cases of Trayvon Martin, who was killed in Sanford, Florida, by a neighborhood watch volunteer; Michael Brown, who was killed by a police officer in Ferguson, Missouri; the precedent-setting U.S. Supreme Court case involving excessive force perpetrated against Robbie Tolan; and 10 of the 13 Black women who were victims in the Holtzclaw Oklahoma City Police rape case in 2015. His also has used his successes on the national stage to help ensure quality legal representation and access to the courts for poor people in his home community, serving as Board Chairman of Legal Services of North Florida and, with his former law partner Daryl Parks, donating $1 million to the organization’s capital campaign.

Attorney Crump is the host of the critically acclaimed legal docudramas, “Evidence of Innocence” on the TVOne and “2Pac: The Search For Justice” on A&E.  He also appeared on Fox’s “You The Jury.”  His CrumpWatch column, which is a legal essay on law, society, and culture, appears on NewsOne.com.  He portrays legendary civil rights attorney Z. Alexander Lobby, in the Hollywood production of the 2017 picture, Marshall.  He also appeared in the documentary, Beating Justice, the Martin Lee Anderson case and BET’s I am Trayvon.  He serves as host for the Benjamin Crump Social Justice Institute Annual Contemporary Issues in Civil Rights Symposium where national thought leaders gather at Tennessee State University.

Benjamin L. Crump was born in 1969 in Lumberton, North Carolina. He graduated from Florida State University (FSU) and received his law degree from FSU College of Law. He is married to Dr. Genae Angelique Crump, and is the proud father of Brooklyn Zeta Crump and legal guardian to Chancellor and Jamarcus Crump.