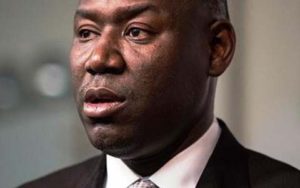 Distinguished lawyers whose names are on the pages of American History books are not there because of their pedigree, their alma mater, or even their affluence–it is because of the landmark cases they won and how their success has changed jurisprudence. As an attorney, among Supreme Court Justice Thurgood Marshall’s landmark cases was Brown v. Board of Education of Topeka; Attorney Johnnie Cochran had Geronimo Pratt’s case, and civil right attorney James Nabrit had Shuttlesworth v. Birmingham, all of whom created significant judicial precedence and changed legal history. Through his legal prowess and advocacy in the Trayvon Martin case, the Martin Lee Anderson Boot Camp case, and the Robbie Tolan US Supreme Court Case, Attorney Benjamin Crump has created a significant legal legacy that ensures that the promise found in our nation’s constitution is indeed real in every state, municipality and neighborhood. His legal acumen as both litigator and advocate has ensured that those most frequently marginalized are protected by their nation’s contract with its constituency. The conspectus of his constitutional battles at both the local, state, and federal levels will be the textbook most frequently referenced by this and future generations of civil rights law in regard to the fundamental protections of our constitutional freedoms.

Benjamin Crump has been recognized as one of The National Trial Lawyers Top 100 Lawyers, Ebony Magazine Power 100 Most Influential African Americans, and bestowed such covenant as the NAACP Thurgood Marshall Award, the SCLC Martin Luther King Servant Leader Award, the National Urban League’s Whitney Young Award, and the AKA’s Eleanor Roosevelt Award. In spite of his immense professional responsibilities, Benjamin Crump still finds time to serve his local community. He readily shares his professional and personal talents with local, statewide and national causes and charities. Mr. Crump was appointed as the inaugural Board Chairman of the Florida’s Big Bend Fair Housing Center, Inc., a Federal Grant organization dedicated to eradication of housing discrimination that operates on a $3,000,000.00 annual budget. He also served as Board Chairman of the Legal Services of North Florida. Attorney Crump and his law partner, Daryl Parks, donated $1,000,000.00 to the organization’s Capital Campaign to ensure that poor people would continue to have quality legal representation and access to the courts. Ms. Crump is the Past-President of the National Bar Association, the largest organization of lawyers of color in the world, representing over 60,000 Black lawyers, judges, and legal professionals.

Attorney Crump believes in fighting to preserve the justice that minorities have achieved throughout the civil rights era and therefore served as General Counsel to the Florida State Conference of the NAACP, sits on the Board of the Innocence Project, and the Equal Justice Institute. Mr. Crump was elected as the Board Chairman of the Internationally Renowned Tallahassee Boys Choir, and he is the Past President of the National Florida State University Black Alumni Association. Mr. Crump is a Life Member and Chairman of the Grand Tribunal of Omega Psi Phi Fraternity, Inc., Life Member of the Southern Christian Leadership Conference, and Life Member of the NAACP and Urban League. He is also a member of Sigma Pi Phi Boule and the Michael R. Moore Lodge 764 PHA, Free and Accepted Masons. Furthermore, Attorney Crump and partner Daryl Parks share their firm’s largesse with the community that has embraced them–most notably; they have endowed scholarships at Florida A&M University, Livingston College, and Florida State University for minority law students, as well as Bethune Cookman University.

Over the years Mr. Crump has dedicated his areas of practice in serious personal injury, wrongful death, and civil rights matters. Throughout his career he has handled civil litigation matters in state and federal courts throughout the Country. He was the first African-American President of the Federal Bar Association for the Northern District of Florida, first African-American Chairman of the Florida State University College of Law Board of Directors, and the first African-American Chair of the Tallahassee Utility Commission. He is a member of the American Bar Association, American Association for Justice, The Florida Justice Association, American Board of Trial Advocates and William Stafford Inns of Court.
Mr. Crump is a frequent speaker and author, which includes his critically acclaimed article, “The Police Don’t Shoot White Man in the Back; Representing Minorities in Police Brutality Cases.” His work has been featured in documentaries such as BET’s “I am Trayvon Martin: A Family’s fight for Justice,” NPR’s “How Lawyer Got America Talking About Trayvon Martin,” “Beating Justice: The Martin Lee Anderson Story,” and the soon to be released, “The Ferguson Cover-Up, the Tragedy Killing of Michael Brown.” He is a member of Bethel Missionary Baptist Church where he serves on the Board of Trustees. He is married to the lovely, Dr. Genae Angelique Crump, guardian of two adopted cousins, Marcus and Chancellor Crump, and proud father of Brooklyn Zeta Crump.

Isiah Reese is the Co-Founder of the highly acclaimed Benjamin Crump Social Justice Institute (BCSJI) created with Attorney Benjamin L. Crump Esq. The BCSJI is an innovative multidisciplinary/multi-cultural approach to learning that encourages various perspectives aimed at ensuring that the voices of all are equally heard and acknowledged. The mission of the BCSJI is to foster opportunities to ensure that the fair and proper administration of laws that safeguard the fundamental rights of everyone, regardless of race, ethnic origin, gender identity, possessions, or socioeconomic status are treated equally and without prejudice not only in the legal system but in life.

Isiah gained national acclaim for his work tireless work in challenging the gap of minority youth educational differences across the nation. He has spoken globally about the implicit bias against the poor and minorities in both the educational and criminal justice system. As the CEO of Speak 2 Me Communications, LLC, a global development company, Isiah is responsible for “building brands and communities for tomorrow, not for today.” A graduate from the Harvard Business School Executive Leadership program (Walt Disney Company program), an MBA in Management from Webster University and a BS in Marketing from South Carolina State University, Isiah is committed to service and is often called upon for motivational seminars for colleges, universities and business organizations, churches and youth organizations, delivering leadership, development and inspirational techniques for today’s environment. Isiah is a proud financial member of Omega Psi Phi Fraternity, Incorporated.